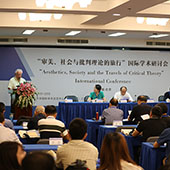 On September 21-22, 2019, Samuel Weber and Peter Fenves co-organized an international conference, "Aesthetics, Society and the Travels of Critical Theory" at Beijing Normal University.  The participants included scholars from around the globe, including China and the United States. Several Northwestern PhD graduates were in attendance, including: Julia Ng, now teaching at Goldsmith’s College, London, and Anthony Adler, teaching at Yonsei University in Seoul, Korea. A major role in the organization of the conference was played by Li Shah, who studied for two years in the German Department at Northwestern and who is currently a Lecturer at Beijing Normal and a faculty research member of  the University’s Center for the Study of Literary Theories.   Other well-known Western scholars included Martin Jay, Professor Emeritus at  UC-Berkeley, and Professor Scott Lash of Goldsmith’s.

CLS Alumna, Nicole Kempis, spends the year in Rwanda with One Acre Fund

The following students received their PhD in Comparative Literary Studies for 2018-19. Congratulations!

Northwestern CLS undergraduates have been awarded the ACLA Presidential Prize for Best Undergraduate Essay for three consecutive years! Mary Bradford and Emma Montgomery won the award in 2017 and 2018. This year, we congratulate Max Rowe, who was awarded the prize for his senior thesis, “Heels, Heels, Heels, Heels, Heels: Repetition and Mu Shiying's Metropolis”. We are grateful to Tristram Wolff and Susannah Gottlieb for their leadership in CLS.