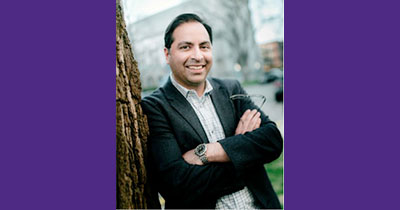 Professor Kinra is is a cultural historian of early modern South Asia, with a special emphasis on the literary, intellectual, religious, and political cultures of the Mughal and early British Empires in India (~16th-19th centuries). Read more about Professor Kinra on our faculty page. 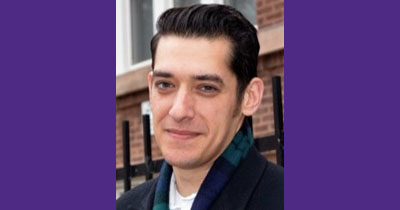 Professor Verma is assistant professor in Radio/Television/Film and teaches in the Screen Cultures PhD program and the MA program in Sound Arts and Industries, where he is also associate director. He has contributed chapters to books about literary history, voice studies, sound studies and film noir, among other subjects. Read more about Professor Verma on our faculty page and below.

Below are core and affiliated faculty updates. A full list of Comparative Literary Studies Program faculty can be found here.

Christopher Bush recently gave invited presentations at Oxford University’s Nissan Institute of Japanese Studies and at the Metropolitan Museum of Art in New York. He continues to be active in field of modernist studies, co-editing the journal Modernism/modernity and serving on the Advisory Committee of the Modernist Studies in Asia Network as well as the Executive Committee of the Modernist Studies Association. He recently published an “Introduction” to Timothy Billings’s critical edition of Ezra Pound’s Cathay (Fordham University Press). In addition, he served as the Chair of the Department of French and Italian for the 2018-2019 academic year.

Corey Byrnes: In December of 2018, Corey’s first book, Fixing Landscape: A Techno-Poetic History of China’s Three Gorges, was published by Columbia University Press. It was recently named co-winner of Columbia University’s Weatherhead East Asian Institute’s First Book Prize. Later this summer, his article “Chinese Landscapes of Desolation” will be published in issue 147 of Representations. In addition, he spent this past spring quarter as a China Visiting Fellow at the University of Sydney’s China Studies Center, where he gave a public lecture and led a workshop on the political aesthetics and environmental impact of China’s island building project in the South China Sea.

Harris Feinsod’s recent publications include Oliverio Girondo's Decals: Complete Early Poems (Open Letter, 2018), which he translated in collaboration with Rachel Galvin, and which was launched at the  San Francisco Center for the Art of Translation. Feinsod also recently published articles on the mysterious German proletarian novelist B. Traven, and on the comparative literatures of the Panama Canal Zone. These essays belong to his current project, "Into Steam: The Global Imaginaries of Maritime Modernism,” for which the National Humanities Center has awarded him a fellowship in 2019-2020. He has recently spoken about his first book, The Poetry of the Americas: From Good Neighbors to Countercultures at the invitations of Vanderbilt, Rutgers, U of Michigan, U of Kentucky, and U of Chicago. It will be reissued as a paperback in 2019 and it is the subject of a roundtable at the 2020 MLA convention in Seattle.

Reginald Gibbons' review essay, "Embroidered Song: John Peck’s Cantilena" was published in the fall 2018 issue of the Notre Dame Review.  In September 2018 his very short story "Dead Man’s Things" was reprinted in the anthology The Best Small Fictions 2018, and he participated in a group reading, with other writers included in that anthology, at the KGB Bar in Manhattan.  In October 2018 he participated in a reading of translations and a discussion on the translating of poetry with Rachel Galvin, Mónica de la Torre, and Daniel Borzutzky, at the annual Lit and Luz Festival of Language, Literature and Art in Chicago.  His poem "A Veteran," from his most recent book of poems, Last Lake, was the Poem of the Day selection by the Poetry Foundation on Nov. 12, 2018 (Veterans' Day).  His poem "Bear" was published in the January 2019 issue of Poetry magazine.  Also in January, Reg taught a poetry translation workshop based on the work of Julia de Burgos at the winter residency of the low-residency MFA Program for Writers at Warren Wilson College, where he also gave a poetry reading.  Reg's new manuscript of poems, RENDITIONS, has been accepted for publication in February 2021.  He is working on another new book of poems, as well as a novel and translations of Hellenistic poets.  Reg has co-translated with Ilya Kutik a volume of translations of selected poems of Boris Pasternak, which has been submitted to publishers.  Gibbons and Kutik are now at work on a second collection of Russian poems.  Reg will be teaching and giving a reading at the Palm Beach Poetry Festival in January 2020.

Domietta Torlasco was a 2018-19 fellow at the Alice Kaplan Institute for the Humanities, where she worked toward the completion of her book manuscript, Rhythm Against Measure: Cinema and the Life of Images. A preliminary version of the chapter on the medium was published as "Photography as Rhythm: On Victor Burgin’s Prairie," in Seeing Degree Zero: Barthes/Burgin and Political Aesthetics (University of Edinburgh Press, 2019), while portions of different chapters were presented at Duke University, the Society for Cinema Studies conference, and the University of Hong Kong. In October 2018, the Slought Foundation in Philadelphia organized An island, a ship, a prison, a month-long installation of two of her videos, Sunken Gardens (U.S., 19 min., 2016) and House Arrest (U.S., 8 min., 2015), which engage themes such as migrancy, borders, surveillance, and debt. In June 2019, Torlasco participated in the Summer Institute for Psychoanalysis by leading a workshop on media and the philosophy of rhythm.

Neil Verma: In 2018-19 Verma published chapters on sound aesthetics in the Routledge Companion to Sound Studies edited by Michael Bull, and on 1930s radio literature in American Literature in Transition, 1929-1941 edited by Ichiro Takayoshi. He published a study of Kaitlyn Prest's The Shadows in RadioDoc Review, and an analysis of Tom Stoppard's play Darkside in Recherches Sémiotique / Semiotics Research. Along with Laura Brueck and Jacob Smith, he signed a contract with the University of Michigan Press for a new edited volume Indian Sound Cultures, Indian Sound Citizenship due out next year. He co-edited a special issue of [In]Transition focusing on the rise of "audiographic" modes of criticism. Verma also completed a two-year Digital Humanities Extension Grant from the NEH to develop tools to measure text in performance, in collaboration with Marit MacArthur of UC Davis. Finally, several of Verma's experimental radio pieces aired at festivals around the world, including at the Chiasso Literary Festival in Switzerland, and at the Radiophrenia Radio Art Festival at the Center for Contemporary Arts in Glasgow.

Erica Weitzman: In 2018-19, Erica Weitzman completed her manuscript for her book project At the Limit of the Obscene: Realism, Profanation, Aesthetics. She also published two journal articles: “‘Ich, von dem du ausgingst?’ Inheritance and Anamorphosis between Freytag and Kafka” (Monatshefte 111.1), and “‘An Injury to Shame’: Obscenity and Affect in Nineteenth-Century German Aesthetics” (Orbis Litterarum 74.1), as well as the article “Ismail Kadares Dosja H. und die Komödie des Epos,” in the collected volume Die Komik der Integration (Aisthesis 2019), the original German version of the article “Ismail Kadare’s The File on H. and the Comedy of Epic,” which appeared in Modern Language Review in 2016. Professor Weitzman also gave talks this past academic year at the Modern Language Association Convention, the University of Zurich, and Northwestern University for the workshop Waste Matters.

Tristram Wolff published two essays this past year: one appeared in a special issue of New Literary History on the state of the field of Romanticism, "Being Several: Reading Blake with Ed Roberson" (Winter 2018), and the other is an essay about the avoidance of emotion in the history of academic styles of reading (PMLA, Jan 2019). Over the winter, spring, and summer of 2019 he has been giving a handful of talks and presentations relating to his current manuscript in progress, Giving Language Time: The Uprooted Word in the Romantic Century. These included a talk hosted by Northwestern's Long 19th Century Colloquium in February, "Language Erosion & Racial Formation: Thought-Figures from 19th-Century Philology"; a talk at UC Berkeley, in April, "Variations on Colonial Encounter (in Thoreau’s ‘Indian Notebooks’)" — which he is preparing to give again at the MLA International Symposium, in Lisbon, Portugal, in July; and talks on William Blake (at the ACLA's conference in Washington DC, in March) and J. G. Herder (in Manchester, UK, in August). In Chicago this August, along with Lily Gurton-Wachter (Smith College), he will lead a seminar at the annual meeting of the North American Society for the Study of Romanticism for faculty and grad students, on poetry, ecology, and race.

BACK TO the TOPNext Article