Comp Lit hosted a successful prospective graduate student weekend in March 2019. Several prospective students joined us for a weekend of exploring Northwestern and learning more about our PhD program. The weekend kicked off with a day full of meetings with prospective students and faculty, as well as cluster information sessions, interdisciplinary colloquium, and concluding reception. The lunchtime colloquium showcased new work and projects by Comparative Literary Studies faculty, Alejandra Uslenghi (Spanish and Portuguese) and Corey Byrnes (Asian Languages and Cultures). Over the weekend prospective students had the opportunity to join current Comp Lit graduate students for a workshop on their current research projects, as well as visit the Museum of Contemporary Art in downtown Chicago.

We welcome the following students to the Comparative Literary Studies PhD program starting in Fall 2019:

Viola Bao is a PhD student in Comparative Literary Studies, a Mellon Cluster Fellow in Poetry and Poetics with a home department in English. Viola was born in Sweden to Chinese parents, and is currently living in Berlin while working as a literary critic and translator. Viola finished her MA at Copenhagen University in Denmark in 2016, and her interests lie within 20th- and 21st-century theory and literature (English, German, Chinese, and Scandinavian), with a special focus on documentary poetry, and conceptual poetry in relation to race. She also occasionally produces a podcast about video games.

Raina Bhagat is a PhD student in Comparative Literary Studies, a Mellon Cluster Fellow in Science Studies with a home department in English. She is interested in pursuing research within speculative and dystopian literatures across English, French and Russian. She holds an MA in English Studies from Jawaharlal Nehru University, New Delhi, India, where her dissertation, “Nationhood and Cultural Diplomacy in a Speculative Age,” discusses the interlocution between communication and nation formation in alien encounter texts, in the area of traditional science fiction.  Before that, she received her BA from St. Xavier’s College, Mumbai, India, where she studied English and French literature. Her research interests lie in the intersections between gender and the environment in 20th and 21st-century speculative fiction, particularly in the context of ecological crisis.

Piotr Kawulok is a PhD student in Comparative Literary Studies with a home department in Slavic and a fellowship in the Global Avant-Garde and Modernist Studies cluster. He holds a master’s degree in Turkish Philology from the Jagiellonian University in Krakow, Poland. His M.A. thesis examined the Turkish writer Oğuz Atay’s writing within the context of modernist and post-modernist poetics. After graduating in 2010, Piotr worked as a lecturer in Poland and Turkey, and as a freelance translator. Several of his literary translations from Turkish to Polish, including two novels by Orhan Pamuk, have been published in Poland. His current interests include Polish and Turkish modernisms, object-oriented ontology, and the uncanny.

"I am glad to have participated at the IWL this year. It was a fascinating experience where I met like-minded intellectuals and friends from all over the world." - Marjan Mohammadi, 2019 IWL participant

"IWL was a fantastic experience: the seminars allowed me to explore fields I had never encountered before but which are now already informing my research. Likewise, it was a pleasure learning from the other participants and I hope to keep in touch with several of them." - Sorrel Dunn, 2019 IWL participant 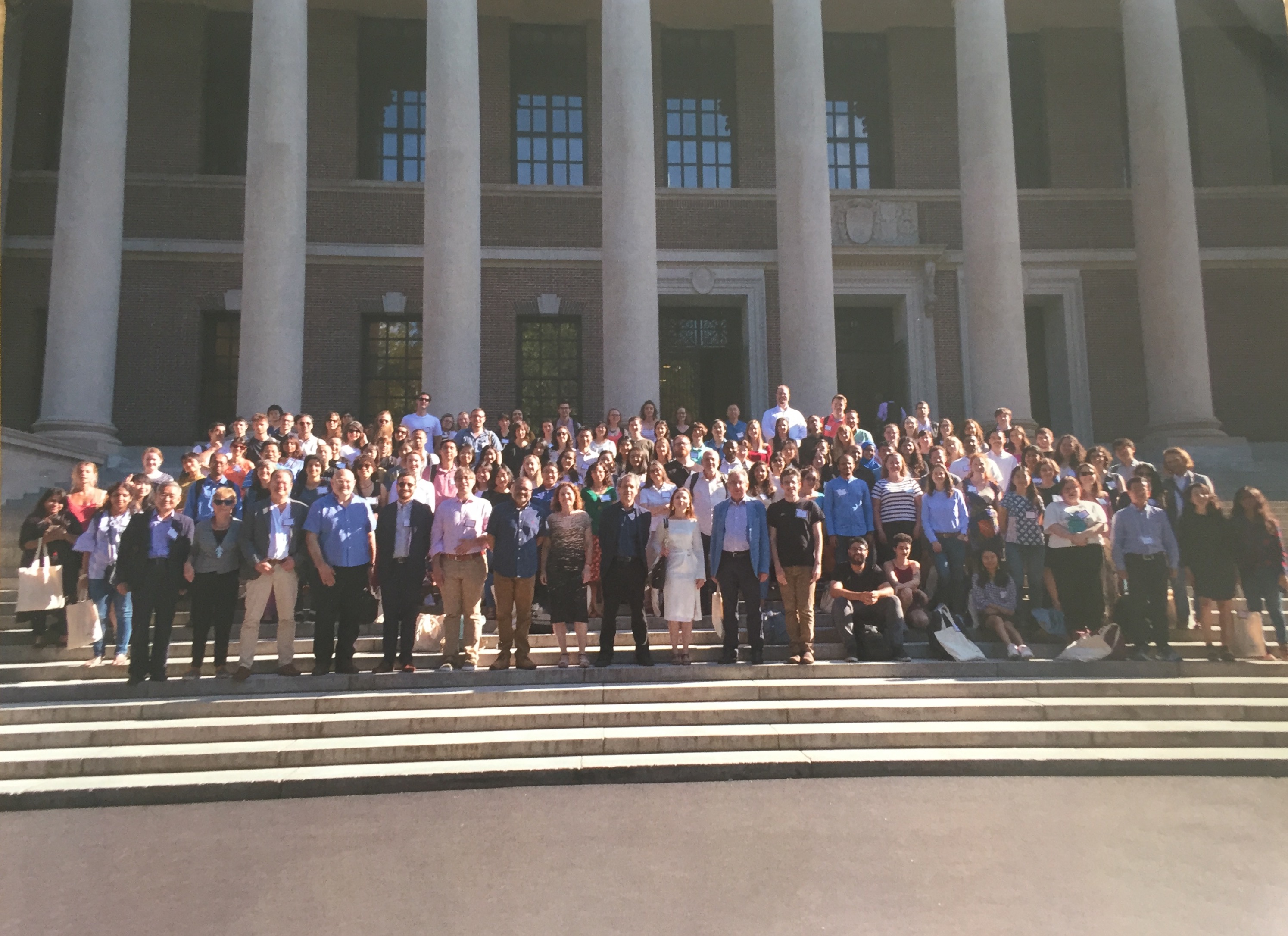 Held in a different city each summer, the Institute for World Literature (IWL) is a month-long summer institute run by David Damrosch (Ernest Bernbaum Professor of Comparative Literature at Harvard) that brings together scholars from all over the world to study literature in a global context. Participants leave IWL with an expanded sense of the variety of the world’s literary cultures and an enlarged community of scholars with whom to share their 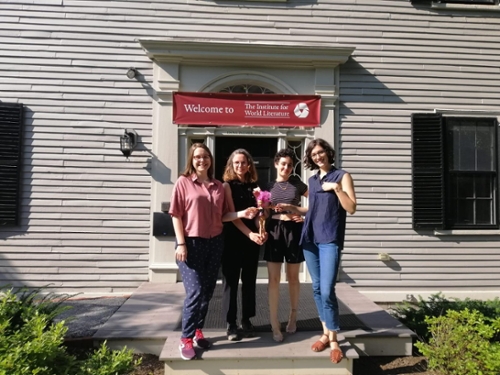 Since 2014, the Comparative Literary Studies Program along with the generous support of Weinberg College and The Graduate School, has been privileged to send a diverse group of students to cities around the globe. We are grateful for the support of both Weinberg and The Graduate School, which has allowed us to facilitate global partnerships and valuable learning opportunities for our students.

Our program’s participation in the IWL is part of a multi-front effort on the part of Comp Lit to expand the curriculum of literary studies at Northwestern to include previously underrepresented national languages and literatures. This summer, IWL was held in Boston, MA at Harvard University. Comp Lit graduate students, Sorrel Dunn and Marjan Mohammadi, were selected to attend the Institute.

Carly Bortman won the Best Seminar Paper award from the Comp Lit program for her paper, "Thinking Mark, Citation, and Montaigne in Derrida's "Before the Law." During summer 2019, Carly traveled to Freiburg, Germany for language study. Along with Mauricio Oportus, Carly was nominated as the Comp Lit Graduate Student Representative for 2019-2020.

Eloisa Bressan: On September 13-15 2018, Eloisa attended the first international Summer school on Pier Paolo Pasolini. The school took place in Pasolini’s birthplace (Casarsa della Delizia, Italy) and was organized in partnership with the University of Trieste (Italy) and Sorbonne Université (France). It brought together the main international Pasolini scholars and a group of graduate students from all over the world and consisted in seminars and events related to the interactions of Pasolini with the Italian cultural environment of his times.

Arif Camoglu's article "Inter-imperial Dimensions of Turkish Literary Modernity" appeared in the fall 2018 issue of MFS: Modern Fiction Studies. Based on his earlier research, supported by Buffet Institute for Global Affairs, and Keyman Modern Turkish Studies Program, the article discloses aggressive imperial impulses in nineteenth century Ottoman writing that are obscured in the historical narrative of 'the sick man of Europe.' Last winter Camoglu was awarded the Graduate School Research Grant, which enabled him to conduct a complimentary archival research for his dissertation.

Sorrel Dunn: In September 2018, Sorrel received the Beijing Wu Prize in Writing for best first year doctoral paper on literature or literary culture. Together with Wenhan Zhang, Sorrel served as the CLS graduate student representative and organized several events throughout the year. These included inviting Siraj Ahmed to campus to discuss his book Archaeology of Babel, and graduate student workshops on article publication and grant/fellowship application. As of this June, Sorrel began working as managing editor for Modernism/modernity.

Maziyar Faridi: In Spring 2019, Maziyar was awarded the WCAS/TGS Teaching Fellowship (for which he taught the Comp Lit freshman seminar, "Global Cinema: The Many Labyrinths of Identity"). In March, Maziyar presented his paper "Translation at the Margins of the Empires: The Politics of Becoming-Minoritarian in Ahmad Shamlou's Translations of Langston Hughes" at the ACLA 2019.  He was informed that his paper has been nominated and is under review for Horst Frenz Prize for the Best Graduate Student Paper Presented at the ACLA. In June, Maziyar was invited by the Didaar Art Collective and the Museum of Contemporary Art Chicago to give a talk on Iranian filmmaker, Abbas Kiarostami. His talk was titled "The Impossible Mourning: Memorializing Abbas Kiarostami's Legacy."

Maïté Marciano was a recipient of the Helen O. Piros Graduate Fellowship this year. She held the position of pensionnaire étranger at the École Normale Supérieure and participated in the Paris Program in Critical Theory. She presented her dissertation project at the Goethe-Universität-École-Normale-Supérieure-Northwestern University doctoral dissertation workshop in Critical Theory, a paper on Virginie Despentes at the American Comparative Literature Association Annual Meeting and another one on Marguerite Duras at the French and Francophone Studies International Colloquium. She also led a session entitled "An Introduction to Affect Theory" in the doctoral workshop "Causerie Critique" at Paris Sorbonne Nouvelle University. Earlier in the year, Maïté reviewed Elizabeth E. Anker and Rita Felski’s edited volume Critique and Postcritique. Her book review can be found in Studies in Twentieth and Twenty-First Century Literature.

Taymaz Pour Mohammad: In April 2019, Taymaz was invited to give a talk at the University of Chicago’s Persian Circle. In addition, Taymaz received the Paris Program in Critical Theory Fellowship Award for 2019-2020.

Scott Newman received a two-year Buffett Institute Graduate Student Fellowship for 2018-2019 and 2019-2020. This award is the highest recognition that the Buffett Institute bestows upon a Northwestern University graduate student. Scott published a peer-reviewed article this year, which is scheduled to come out this summer 2019 in the journal Francosphères vol. 8 no. 1. The title is "From Marvellous Realism to World Literature: Rethinking the Human with Jacques Stephen Alexis."

Jonas Rosenbrück: During the 2018-19 academic year, Jonas presented his work at three conferences: the ACLA in Georgetown, the GSA in Pittsburgh and a Walter Benjamin conference in Berlin; his ACLA paper on “reversibility” was nominated for the Horst Frenz Prize for best graduate student paper. He was awarded Weinberg’s Outstanding Graduate Student Teaching Award, and an article on the "aesthetics of obscurity" in Baumgarten and Blanchot was accepted for publication in Comparative Literature (forthcoming in the March 2020 issue).

Ariel Weiner is a Third-Year PhD student in Comparative Literary (CLS) Studies & German. She is also a fellow of Northwestern’s Jewish Studies Cluster and holds a Certificate in Critical Theory. In 2018-19, Ariel received a Doctoral Fellowship from the Canadian Social Sciences and Humanities Research Council (SSHRC), she also passed her CLS Theory Exams, and completed her second year of coursework. In June she attended the second annual Summer Institute for Psychoanalysis at Northwestern and participated in the Center for Global Culture and Communication (CGCC)'s Summer Institute on Media Aesthetics in July. She also received funding from the Jewish Studies Cluster to pursue German language acquisition over the summer. Ariel is now preparing for her German Qualifying Exams, which will take place in the spring of 2019; and this fall she will be presenting a paper on Martin Buber and Walter Benjamin at "Religion’s Turn: A Chicago Graduate Conference on the Philosophy of Religions," hosted by the University of Chicago Divinity School.