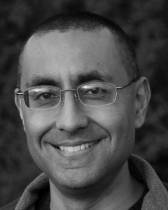 Vivasvan Soni (Ph.D. Duke University, 2000) studies and teaches eighteenth-century British literature, as well as critical and literary theory. His book, Mourning Happiness: Narrative and the Politics of Modernity, was published by Cornell University Press in 2010 and was the recipient of the Modern Language Association's eighteenth annual Prize for a First Book. In it, he traces the narrative transformations in the eighteenth-century which produce a modern conception of happiness, arguing that these transformations result in the erasure of happiness as a guiding idea in politics. He discovers in classical ideas of happiness, particularly Solon's proverb "Call no man happy until he is dead," the outlines of a concept of happiness that might sustain a utopian politics. In their citation for Soni's book, the MLA prize committee noted that "Mourning Happiness powerfully transcends the usual field limitations of academic scholarship, making a compelling case for how an ancient Greek construal of happiness could reawaken the radical force of that denuded concept in our own present.… This provocative study affirms the importance of narrative form to one of our most upheld and yet least examined ideals.”

Soni's areas of interest include the rise of the novel, moral and political theory, narratology, theories of tragedy, utopian writing and theories of modernity. He is currently at work on two new projects. The first diagnoses a "crisis of judgment" in the eighteenth-century whose legacy is still with us. Read in this context, the novels of Fielding and Austen offer an exemplary pedagogy of judgment. Soni has edited a special issue of the journal ECTI (51.3) on The Crisis of Judgment. His second new project, tentatively titled, The Utopian Imagination: Fiction and the Possibilities of Action, will examine the fate of utopian writing and thinking in modernity.

Soni has also taught at the University of Michigan (Ann Arbor) and at Yale University where he held a Woodrow Wilson Postdoctoral Fellowship (2000-2002). He was the recipient of an American Philosophical Society Fellowship for 2010-11 and an Andrew W. Mellon/NEH Fellowship at the Newberry in 2014-15 to work on The Crisis of Judgment.