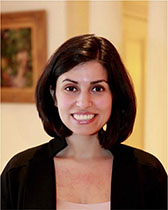 Nazarian is the author of Love’s Wounds: Violence and the Politics of Poetry in Early Modern Europe (Cornell University Press, 2016), which investigates widespread metaphors of violence in early modern French, English, and Italian literature. Through its comparative, inter-genre studies of Petrarch and five major Petrarchan poets of the sixteenth and early seventeenth centuries (Maurice Scève, Joachim du Bellay, Agrippa d’Aubigné, Edmund Spenser and William Shakespeare), Love's Wounds shows how they actively transformed love poetry into a powerful tool for defining the nation and for reflecting on and shaping state authority. Her second book project, Violent Sympathies: Literature, Sovereignty and the Hazards of Fellow Feeling brings together early modern literature and contemporary political theory to examine the challenges posed by sympathy for state authority and legitimacy. Violent Sympathies brings the early modern period into conversation with the twentieth and twenty-first centuries to show not only how often literature is political, but also how often politics is literary.

Nazarian has recently been awarded a Kaplan Institute for the Humanities Faculty Fellowship for 2017-2018. She received the Barbara Thom Postdoctoral Fellowship at the Huntington Library in 2012-2013. She was awarded Northwestern University’s Weinberg College of Arts and Sciences Distinguished Teaching Award in 2011-2012.