The year-long Provincializing Romanticism talk and workshop series brought together scholars of the global 19th century with an intention to move beyond the critical paradigms that privilege white Euro-American canon and agency. Launched by Arif Camoglu and co-organized with Tristram Wolff, the series was indebted to the efforts of a group of scholars in Romanticism known as the Bigger6Romantix, engaged with confronting the inequities that undergird the aesthetic and institutional dominance of capital-R romanticism. The series was launched on October 4th 2019 with a roundtable discussion between Northwestern Comparative Literary Studies faculty Rebecca Johnson, Tristram Wolff, and Rajeev Kinra, reflecting on the promises and possible shortcomings of Dipesh Chakarabarty's "Provincializing Europe" in enacting a politically vigilant study of literary translations and cultural encounters. The second event featured a talk by Professor G. S. Sahota (UC Santa Cruz) on October 17th 2019. Sahota's essay probed the conditions of intercultural fusion through a residually romantic German interest in Indian literature. On February 6th 2020, the series hosted a roundtable discussion between professors Nicole Spigner, Kelly Wisecup, Sarah Johnson (University of Chicago) and Isaiah Wilner (University of Chicago). The presentations and conversations included in this event centered the marginalized Black and Indigenous archives of the long nineteenth-century. While the pandemic disrupted the planning of future events in physical settings, the series continued to shine light on the obscured literary sources and itineraries of the global 19th century by holding virtual events through the Spring Quarter. These began with a Zoom dialogue between professors Bakary Diaby (Skidmore College) and Omar Miranda (University of San Francisco) on May 1st 2020. Focusing attention more broadly on Atlantic archives (Latin American and Black Atlantic), this collaboration addressed global and ethnoracial asymmetries that ground the field of capital R romanticism — both as a literary formation and as an academic subdiscipline — by drawing critical and comparative methodologies from critical race theory. Expanding on the spirit of this dialogue, the concluding event called for a radical re-evaluation of the 19th-century global literary landscape by shifting attention to its uncredited actors. Professor Marlene Daut's talk (University of Virginia), offered via Zoom on May 15th 2020, revisited the Haitian world of Romanticism to scrutinize the role of white supremacy in the enduring reluctance to recognize political and aesthetic influences of racialized subjects on Euro-American intellectual traditions. 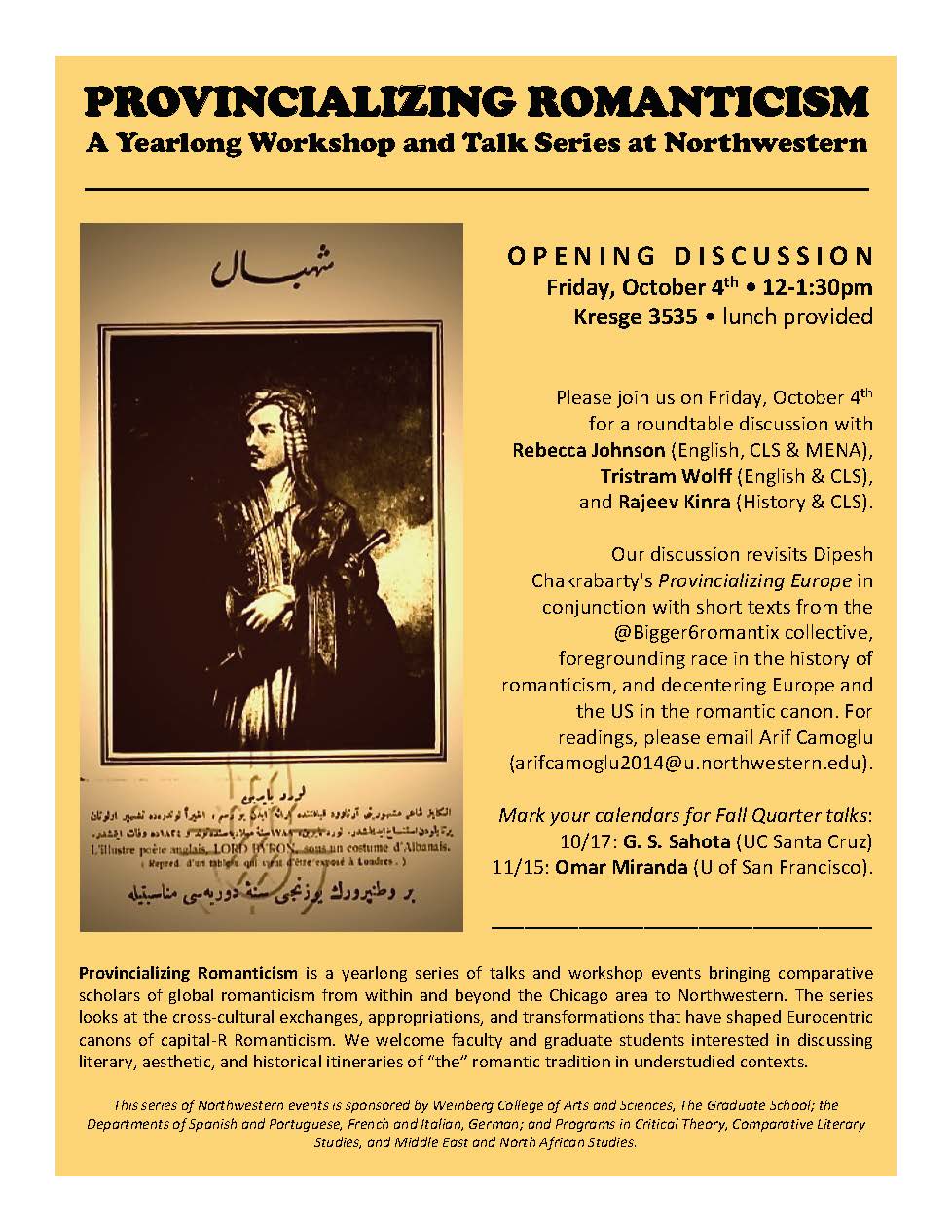 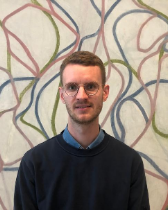 From Jonas: "Starting September 1st, I will transition into the new role of Postdoctoral Fellow in CLS. I look forward to teaching the Senior Seminar in the fall and begin work on turning my recently defended dissertation, titled “Senses of Smell: The Differentiation of Air in Hölderlin, Nietzsche, and Ponge,” into a monograph. The project is located at the intersection of literary theory, ecocriticism, and theories of modernity, and will expand to include authors from the German, French, and Anglophone traditions in the 19th and 20th century. Further research interests of my work as a postdoc will include questions of education and “languages of discipline,” literatures of hygiene and cleanliness as well as continued work on the theory of the senses. As Director of Volunteer Development for the Northwestern Prison Education Program, I will aim to bring CLS into conversation with dialogues around incarceration and criminal justice on campus, drawing on the unique richness of perspectives in our program. Last but not least, I look forward to being a resource to any and all students in CLS, especially incoming Ph.D students—feel free to reach out to set up a meeting, if you’d like!" 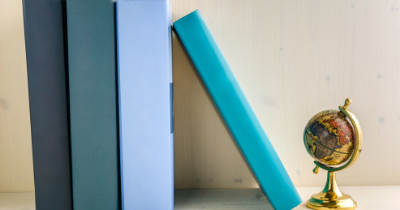 The Distinguished Senior Essay was awarded to Camille Lopez-Silvero.

The Highest Achievement in Undergraduate Research was awarded to Isabella Schmidt. 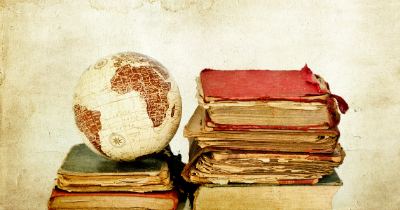 Roundtable discussion with Rebecca Johnson (English, CLS & MENA), Tristram Wolff (English & CLS), and Rajeev Kinra (History & CLS). Our discussion revisits Dipesh Chakrabarty's Provincializing Europe in conjunction with short texts from the @Bigger6romantix collective, foregrounding race in the history of romanticism, and decentering Europe and the US in the romantic canon.

Thank you to the sponsors: Weinberg College of Arts and Sciences, The Graduate School; the Departments of Spanish and Portuguese, French and Italian, German; and Programs in Critical Theory, Comparative Literary Studies, and Middle East and North African Studies

Minor literatures, when translated into major languages like English, possess a distinctive strangeness. Minority means marginality, defined by narrow circulation and restricted knowledge, which can in turn prevent a translation from being published in a major language. Yet the translation can also prove strange because it challenges both dominant values in major languages and values the source text supported in its originary language. Minority complicates theories of world literature as well as the publishing practices that world literature. Taking as a case study the English translation of modern Catalan writer J.V. Foix’s prose poems, this lecture will explore these issues so as to address the question: How should a minor literature be translated into a major language? 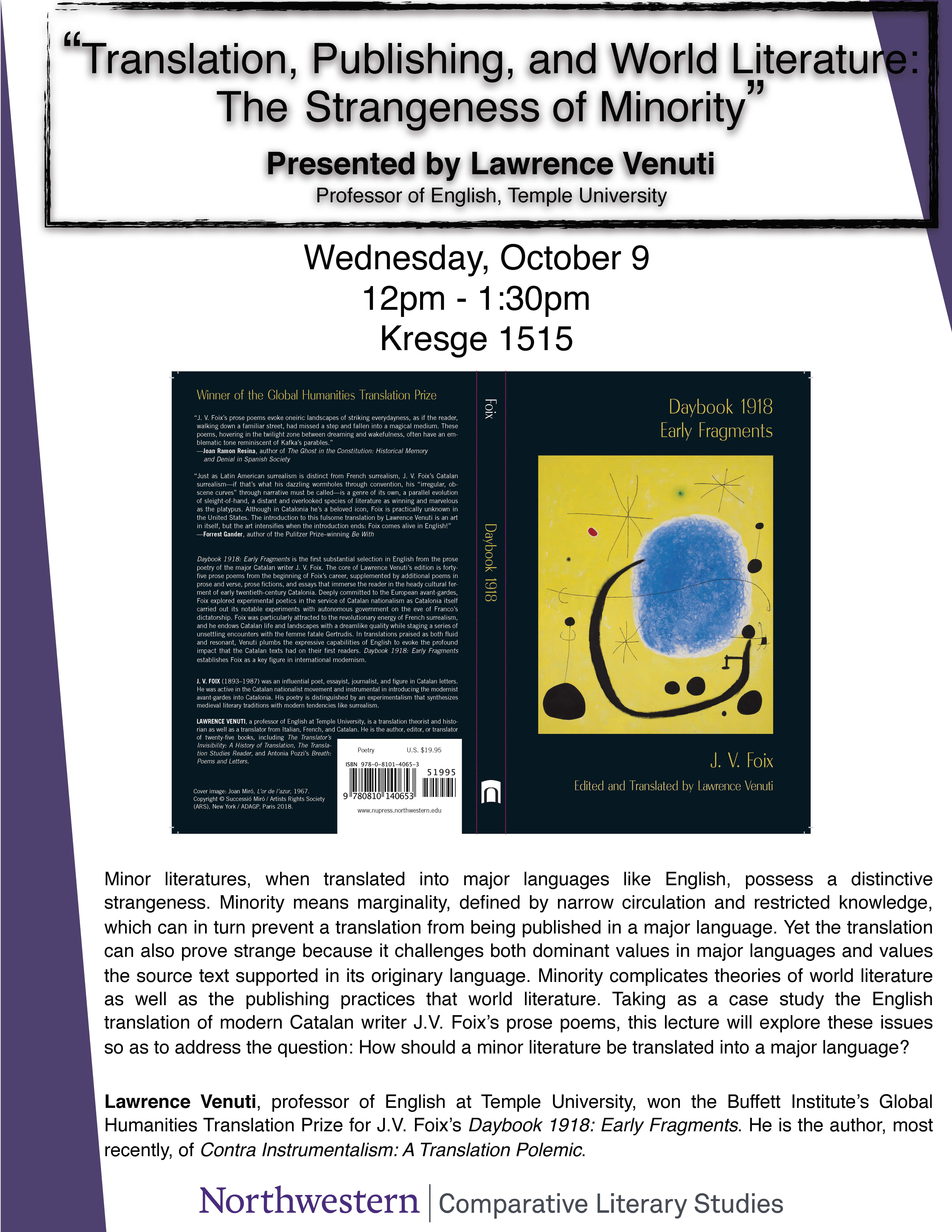 Through a reading of Thomas Mann’s novella The Transposed Heads:  A Legend of India (1940) and the Indological research of Heinrich Zimmer which inspired it, this presentation will explore two interrelated sets of themes:  cross-cultural modes of identification and processes of de-particularization; and the challenges of writing Indo-German literary history against the grain of nationalist or civilizational paradigms.  One question that comes into relief in this interpretive exercise revolves around the geography of literary-historical categories.  What are, for instance, the implicit geographies of romanticism?  Where does India lie in the historical temporality of this phenomenon?  What does it mean to write into this category a locus that is both too early or too late for the times?  How might we fashion alternative paradigms to better grasp the simultaneity of the planetary event? 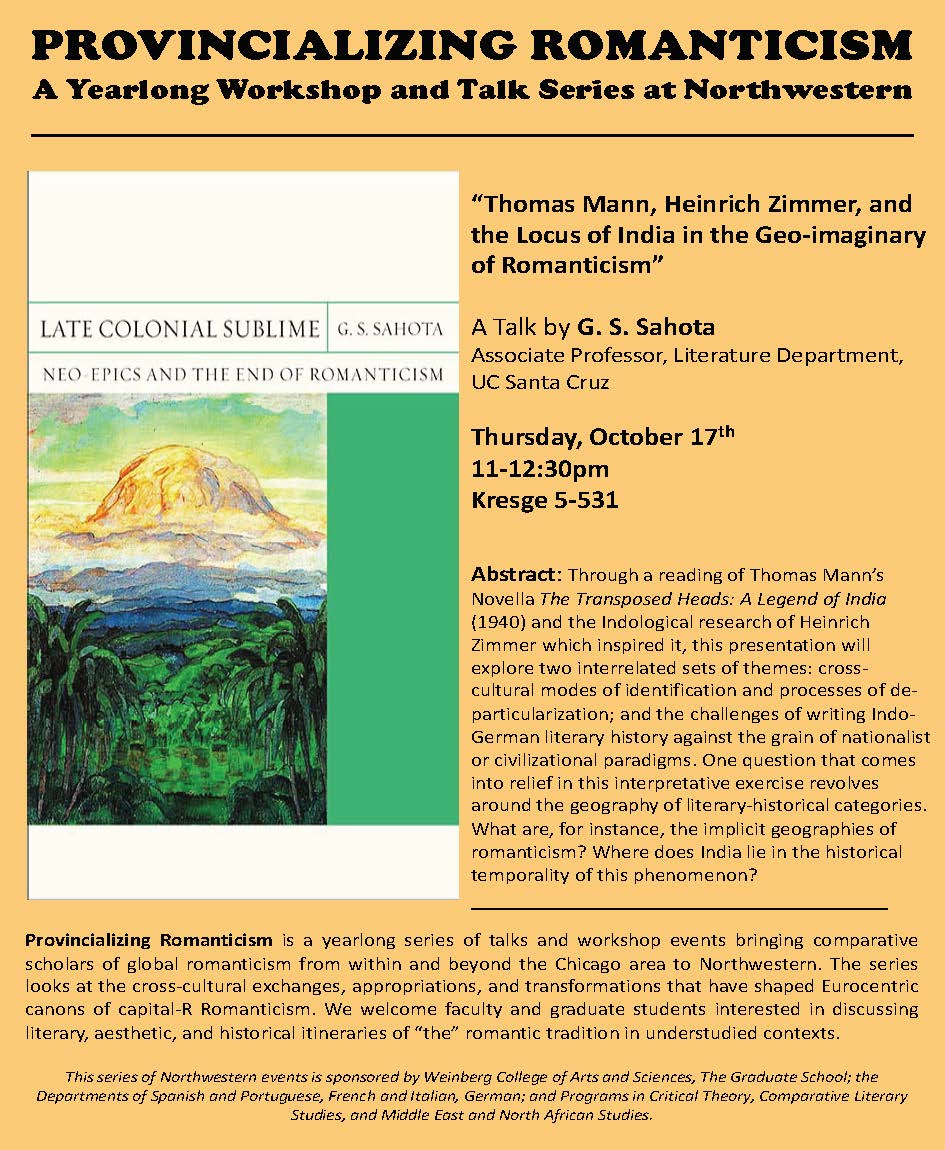 At a moment when literary critics wonder whether the reflexive urge to “stand back” from an aesthetic object impoverishes critical encounters with works of art, this talk will ask: why suppose that distance, obstacles, and constraints impede aesthetic pleasure? On the contrary, might not critical guardedness intensify rather than weaken aesthetic sensation? “Vexed,” in this talk, names both an affective state and a critical disposition. Drawing upon attachment theory, I characterize this state as one of resistant attachment: a state in which contradictory impulses vie for expression—for example, the desire to draw closer but also to flee. The talk will consider literary incarnations of resistant attachment that both model and solicit this critical disposition.

Sarah Tindal Kareem is Associate Professor in the Department of English at UCLA. Her research and teaching focus on eighteenth-century literature with particular attention to the history and theory of the novel and fiction’s representation and solicitation of affective attachments. Her first book, Eighteenth-Century Fiction and the Reinvention of Wonder (Oxford 2014), argued that wonder and the marvelous were integral to eighteenth-century literary realism. Her current book project focuses on the ways in which distance, obstacles, and negative feelings facilitate attachments within—and with—literary works.

Thank you to the co-sponsors: Critical Theory Cluster and Department of English 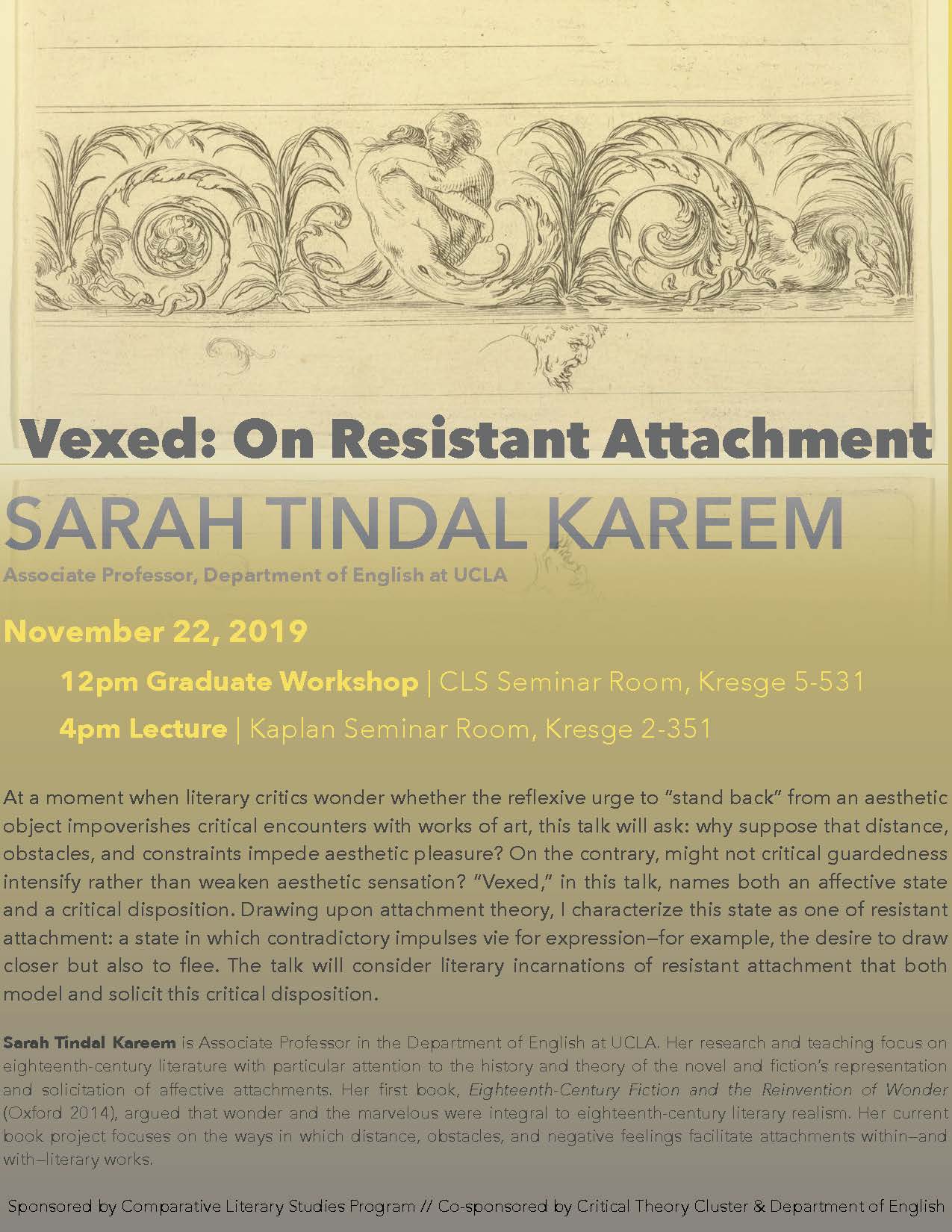 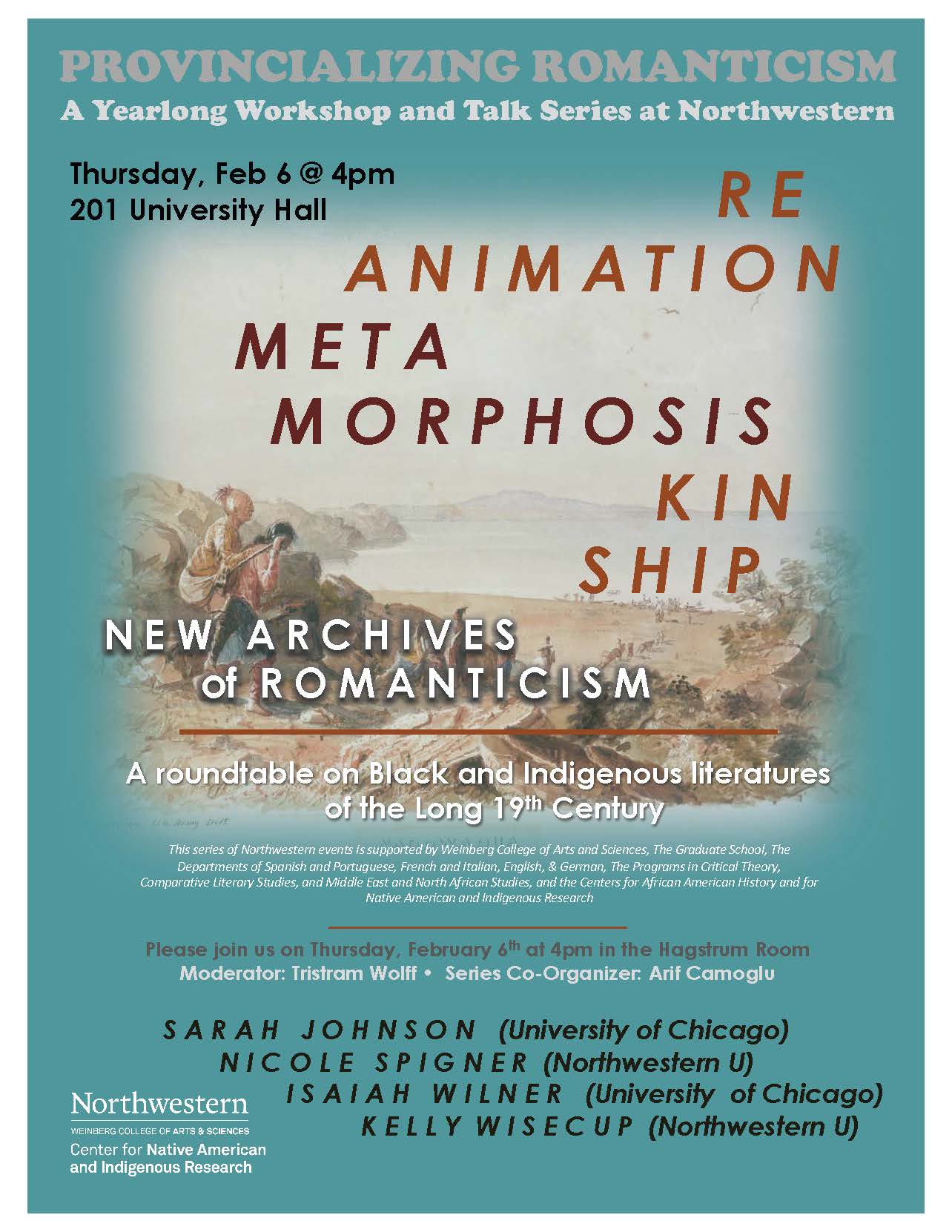 Even if you do not consider digital humanities your primary research/teaching field, the growing demand for assistant professors and other academic professionals who have some proficiency in DH (as an "added advantage") makes it strategic to be conversant with the current debates in digital humanities. DH is a broad community of practice, encompassing digital pedagogies, public outreach, computational research, and online scholarly projects. But this large and growing field can be applied productively to the work you're already doing in your research and teaching, and it's possible to balance the requirements of a competitive job market with the complexities of digital scholarship in the 21st century. 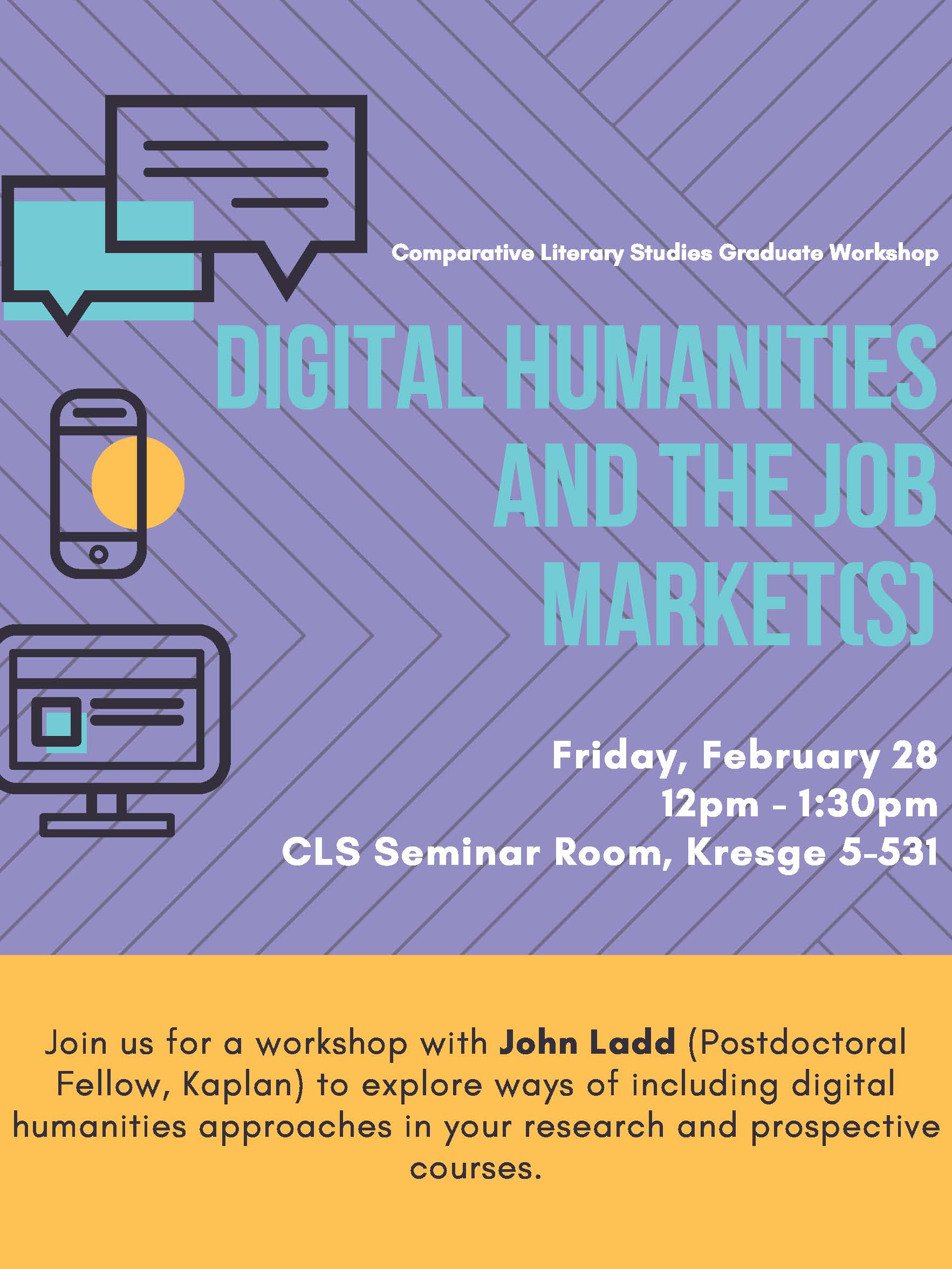 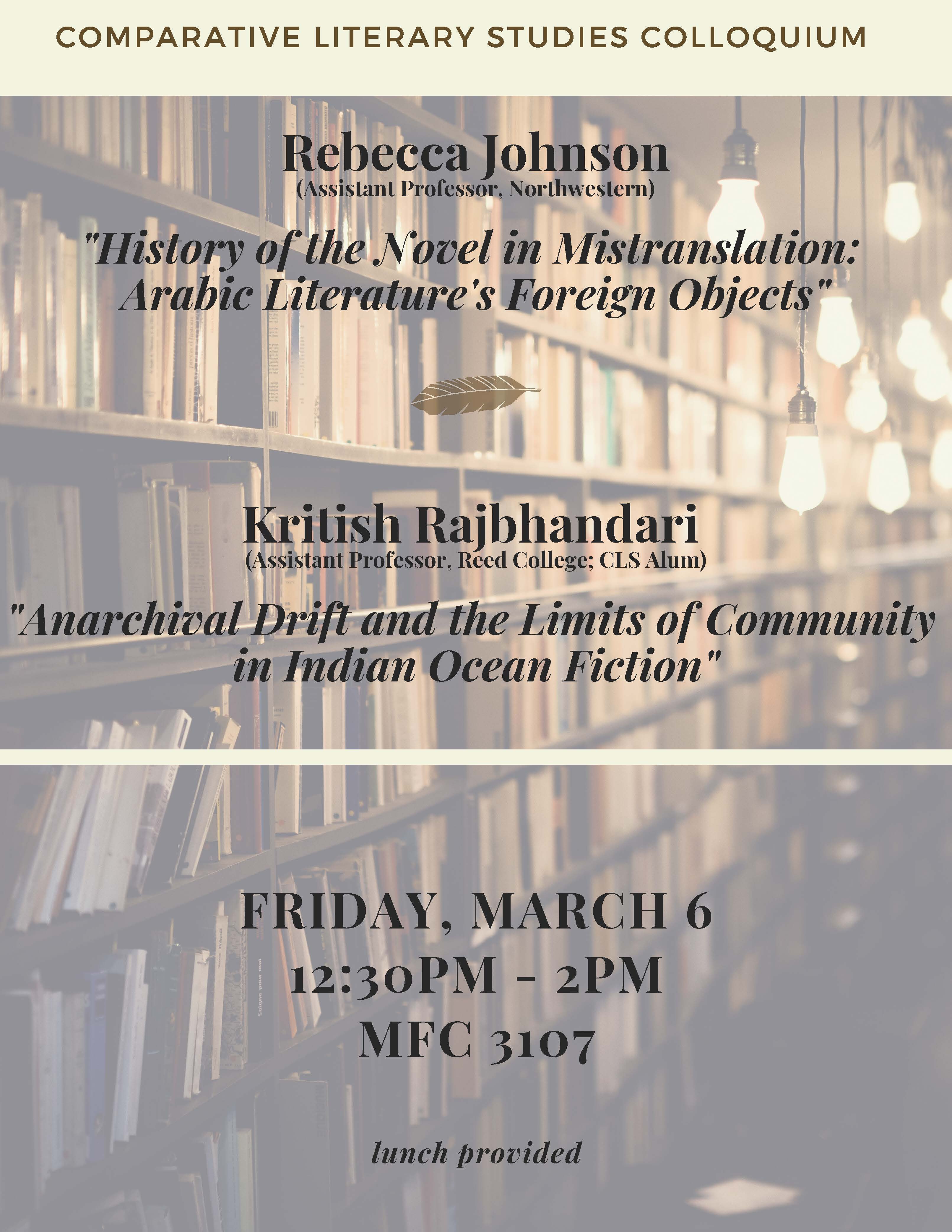 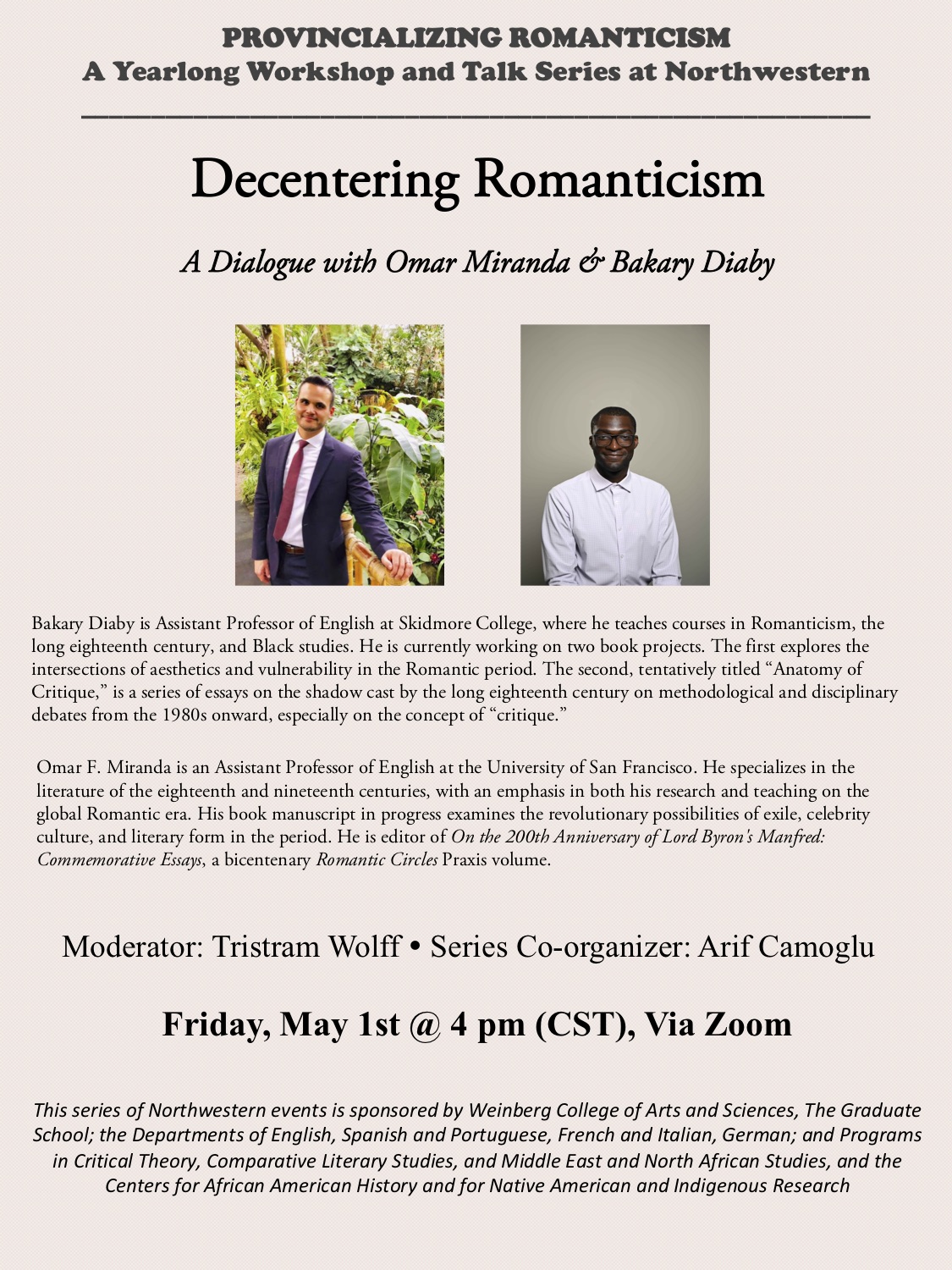 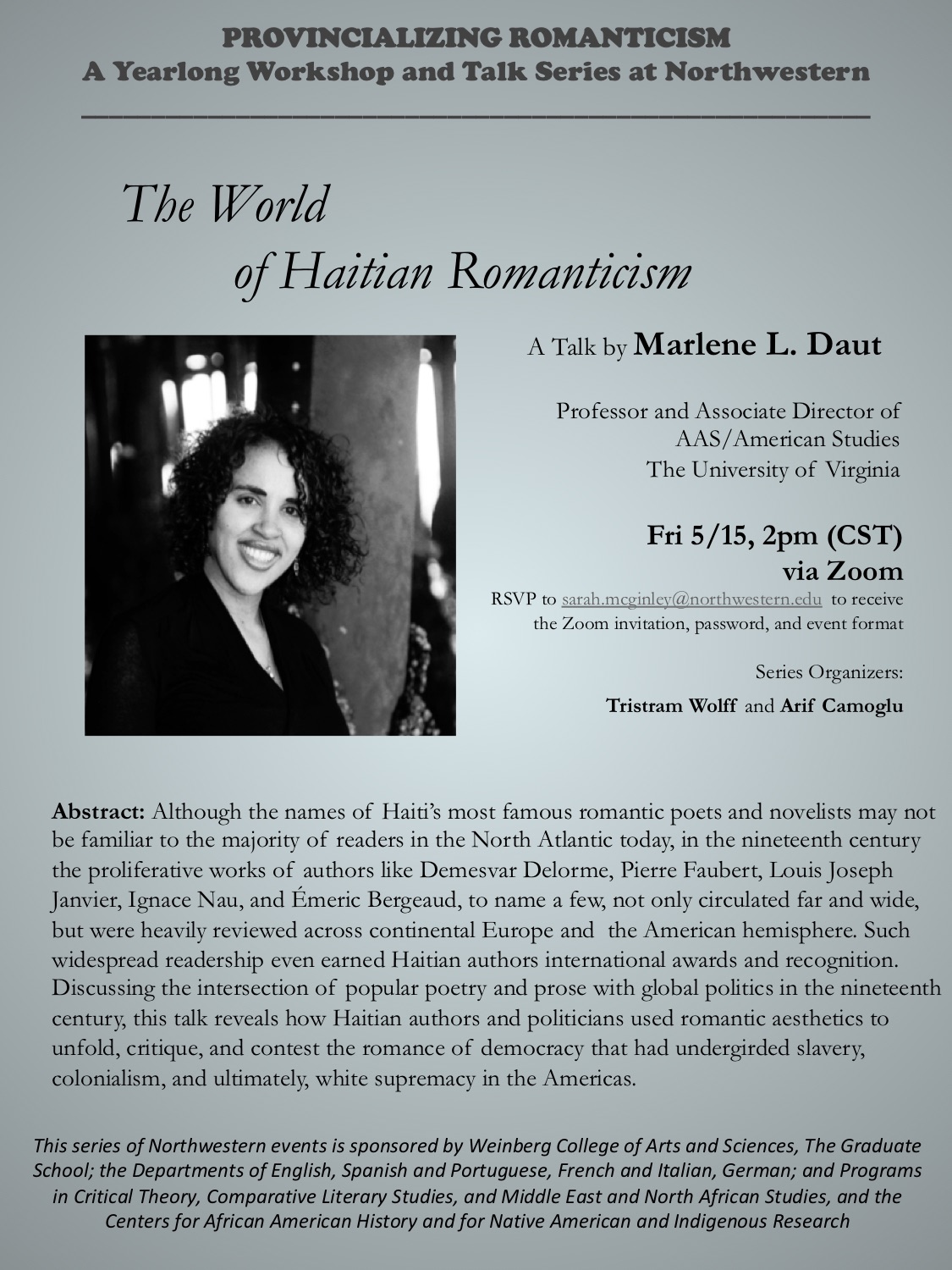 Imperfect Cinema and the “Poor Image” - Workshop with Michael Metzger, Pick-Laudati Curator of Media Arts at the Block Museum (Virtual Event) | May 21, 2020

Dominant forms of cinema are structured around hierarchies of clarity and access: high-resolution images, wide theatrical releases, and now, immediate availability via streaming platforms. These hierarchies serve not only to deliver content, but to reinforce aesthetic values and mechanisms of distribution and production that require inordinate amounts of capital and ever-more sophisticated technology. This workshop will examine how filmmakers and artists have articulated alternatives to these values by upholding the political and aesthetic virtues of imperfection. From the unpolished counter-cinema championed by Cuban filmmaker Julio García Espinosa in the 1960s to contemporary polemics around what Hito Steyerl and Laura U. Marks have called “the poor image,” participants in this workshop will be familiarized with a range of film and video works that advance anti-colonialist and anti-capitalist visions of art by foregrounding the material limitations of their production. Particular attention will be paid to specific formats, tools, techniques, and methods of distribution and archival preservation, providing participants with a vocabulary for identifying and analyzing the layers of meaning implicit in so-called sonic and visual “imperfections.” 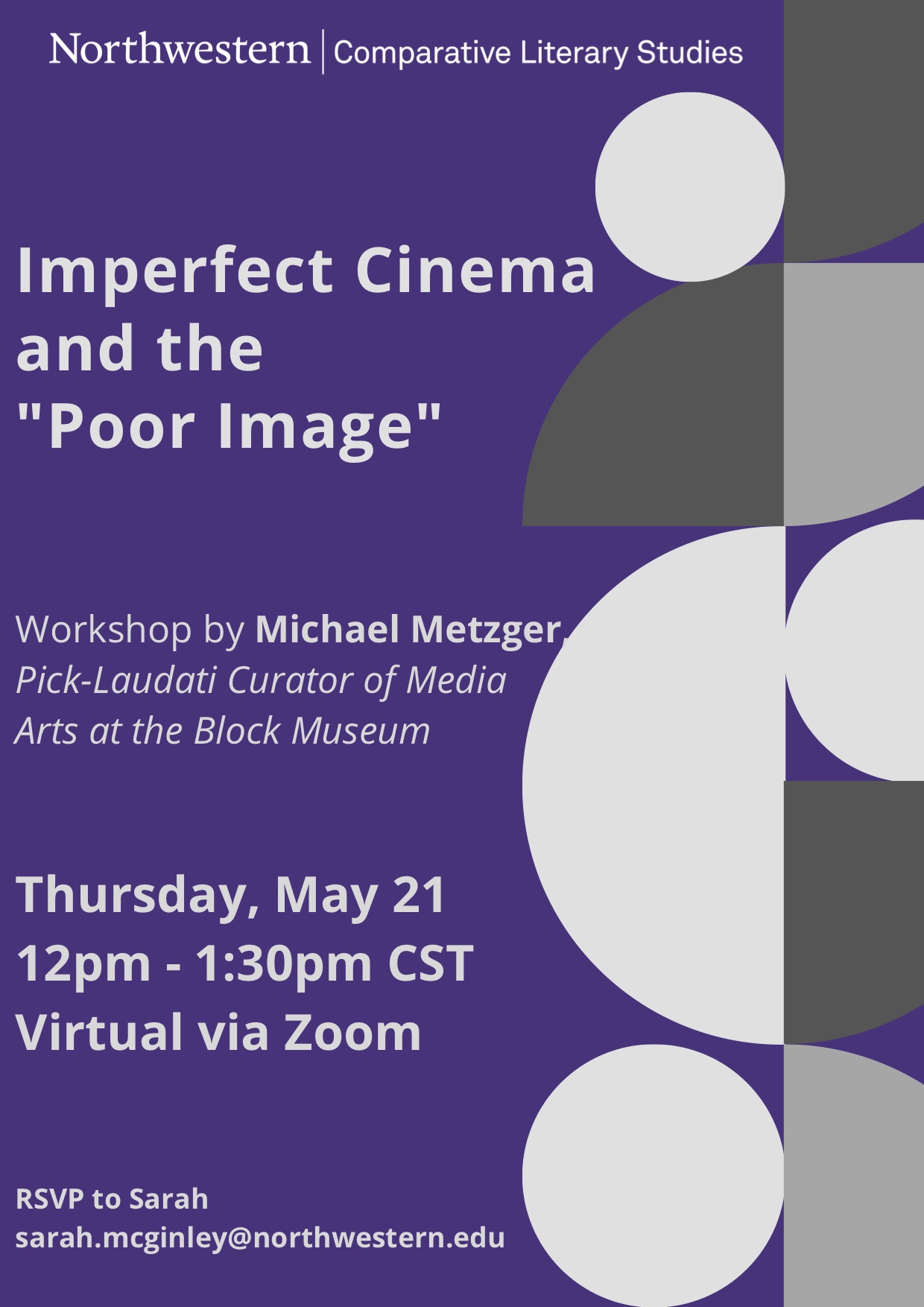